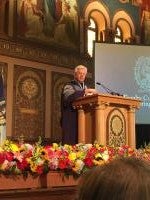 Prof. Tom L. Beauchamp (new window) delivered the “Life of Learning” address to the Spring Faculty Convocation on April 5, 2016. Beauchamp was honored by President John DeGioia and Provost Robert Groves for the extraordinary achievements of his long career as a pioneer in biomedical ethics and a scholar of the philosophy of the 18th century Scottish philosopher, David Hume. Beauchamp spoke about his childhood in Dallas and experiences fighting segregation and racism there, at Southern Methodist University (where he earned his BA degree), and in the Methodist church of his childhood. These early experiences fighting injustice led Beauchamp to devote his life to the study and advancement of practical ethics, first as an MDiv student at Yale and then as a PhD student in philosophy at Johns Hopkins. After he was hired at GU in 1970, Beauchamp became one of the first members of the Kennedy Institute of Ethics. He was the principal author of the Belmont Report (new window), for the National Commission for the Protection of Human Subjects of Biomedical and Behavioral Research, which established Federal guidelines for the use of human subjects in scientific and medical research. Beauchamp co-authored, along with James Childress of the University of Virginia, the best-selling textbook of bioethics, Principles of Biomedical Ethics (new window), currently in its 7th edition. Beauchamp is the co-author, along with his wife Ruth Faden, executive director of the Johns Hopkins Berman Institute of Ethics, of A History and Theory of Informed Consent (new window), the gold standard for the academic understanding of informed consent. Beauchamp is the co-author, along with Alexander Rosenberg of Duke University, of a major study of David Hume’s theory of causation, Hume and the Problem of Causation (new window), and he serves as the general editor, along with David Fate Norton and M. A. Stewart, of the Critical Edition of the Works of David Hume (new window), for Clarendon Press, Oxford University Press. Beauchamp has made significant contributions to many other areas of philosophical inquiry, including business ethics and ethics and animals.